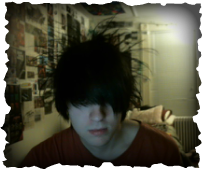 Hello, I am M0nk3yC0d3r. I was born on December 19th of 1994. I am a small time programmer. I mostly work with C#. I am engaged to the most beautiful girl in the world. Theres really not much to say about me because I never really had the most interesting life. Although my life was boring for the most part, on April 28th of 2013 I met the girl of my dreams. I had been talking to her on facebook for a few days and I had a barbecue for Ski Patrol to go to so I asked her to go with me. That day was the day my life turned around in the best way possible. Now on December 8th at like 5:30AM - 6:00AM I asked her to marry me. She said yes! Me and her are both gamers so we talk about games and play games together. She is probably better then me at CoD. She plays Playstation and I play PC which means we cant really play together with us both doing as good as we can do. She helps me make my games by giving me ideas and I am teaching her how to program so she can one day help me with the programing. Even though I was a nerdy loser in school and she was the popular cheerleader caption in school, we are the perfect couple! We both love each other so much.

I make games as well as play games. I am a huge FPS player. I love Call of Duty more then any other game in the world. My favorite CoD games in order are:
The reason Black Ops is last even though it is a great game is because that game has the most lag out of every CoD game for PC and also it only has the server list which I hate in FPS games. MW2, MW3 and Black Ops 2 servers work the same as the console versions which is why I love those games. MW2 and MW3 are amazing but very similar when it comes to game play and look but I like MW3's customization better. Ghosts is by far the best CoD game I have ever played. Great look, Great gameplay, and also amazing customization. Once in a while I play some MMORPGs. I have to be in the mood to play those. For those I only really play Tera which is a great game. I actually find it to be better then WoW. I also play Minecraft but thats only sometimes when I am bored. It's fun to play but all the changes made to it since alpha ruined it for me. Even though the new launcher lets you play the older versions I still don't play it much.

The games I am making aren't FPS games, sadly, but I hope to make some FPS games one day. Currently I am making a text and button based fighter game and a card game. I am spending more time on the card game because it's newer and more fun to make. It is called Rinnoeja. The name came from a mixture of Rinny and Sonja. Rinny is my chinchilla's name and Sonja is going to be the name of my first daughter whenever we have one. My fiancé loves the name Sonja which is why we are going to name her that. If you want to read more about Rinnoeja, Click Here. The other game I am making is called TextQuest. A friend of mine came up with TextQuest much because I already had to remake it like 5 times and now it's just boring to make. If you want to read more about TextQuest, Click Here.
Black ops ii: Class Setups

There are a few things I would like to accomplish someday. I am not really one for making goals but these things I feel are special enough to be goals to set for myself.

Not a lot of goals but they are special goals. I do plan on accomplishing all of them at some point in my life.
Powered by